Book Counsling Session With
Our Experts

Is SSC CHSL Easy to Crack? Unveiling The Hidden Tips For Preparation 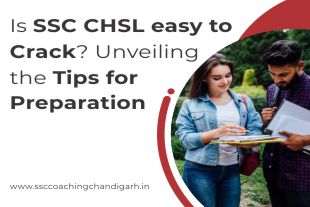 No exam is hard for those who are not backed up with quality preparation. There is nothing like that you will not be able to clear the SSC CHSL exam with extreme preparation. Any exam could be difficult for individuals who don't put in the time and effort to prepare. Only with a thorough understanding of the material can a student accurately assess the degree of difficulty of a task. Do competitive tests pose a challenge?

Because that's what government tests are supposed to be for, correct? This can only be cracked by students who are willing and passionate about it. Candidates' talents are assessed through the use of these tests. In order for a deserving candidate to clear the exam, the exam conducting authorities make sure to set a specific difficulty level. Most applicants are eagerly awaiting the announcement of the SSC CHSL exam registration deadline, which is expected to be released very soon. 'Is SSC CHSL easy to crack?' is the most often asked question among 10th and 12th-grade students.

Despite the widespread belief that the exam is extremely difficult, the truth is that an average student may easily pass the SSC CHSL examination. A lot of students believe this notion, and it's the main reason they're stressed out about examinations these days. All applicants must also be fully cognizant of and confident in their own ability to achieve greatness as a result of their diligence and dedication. A good institute providing a great place to go for help with your for SSC CHSL exam preparation.

How Did SSC CHSL Easy to Crack?

There is no denying the fact that the entire SSC CHSL exam is not that impossible with continuous preparation and perseverance. You will surely be able to qualify it in the limited time frame. Here in this blog, we will devotedly talk about how SSC CHSL can become easy for all the aspiration filled students. In order to pass this test, some candidates choose to enroll in preparation courses, while others attempt to study independently. Without coaching, passing the exam is undoubtedly achievable, but one must be aware of the necessary study materials and a strategy in place before beginning the process.

We've put up a meticulous blog on 'Is SSC CHSL easy to crack?' today. We can tell you that if you follow our advice, you will pass the test with flying colors. As a result, let's not spend any time and go right to the point. The whole process of cracking the SSC CHSL exam might become effortless if you consider making your preparation strong. Working smart rather than hard is something that will easily help you clear the SSC CHSL exam in a productive way. The more you work hard the more you will be able to reach your desired level in the limited duration of time.

Why SSC CHSL Exam Challenging For You?

Approximately 30 million people applied for the SSC CHSL test last year, which demonstrates how popular the exam is. With 3259 jobs this year, if 15 million individuals apply, the success rate is merely 0.21%. Isn't that a major undertaking?

In order to pass the SSC CHSL exam, you really have to surpass the huge competition. There will be 100 multiple-choice questions (MCQs) in 60 minutes on the tier 1 preliminary test. After that, there comes Tier 2, the descriptive exam. There is also Tier 3, which is a computer competency exam. The complexity of the choosing process is increased by this lengthy procedure.

An huge amount of material must be covered, including but not limited to: SSC CHSL has a large list of topics to cover. Quantitative Aptitude, Reasoning Ability, English Language, and General Awareness make up the four sections of the exam. In certain banks, the Preliminary tests for the PO (Probationary Officer) job are much longer than the curriculum for this course.

SSC CHSL has very high cutoffs, hence mastery of the material is a must for success in this test. Last year, the general category cutoff was 127, which indicates that at least 64 tries (with 100% accuracy) are required to pass the test. That's less than a minute for each question, which shows just how much preparation is required to ace this test. If you really require true help to clear the upcoming SSC CHSL exam. Then you can easily consider taking assistance from the best SSC CHSL Coaching in Chandigarh.

Is SSC CHSL Past Selections Help You?

In the previous year, there were around 2000+ vacancies of the students. In which the staff selection commission picked the potential candidates for the different types of posts. It is expected that in the coming year the staff selection will surely pass more vacancies. If you are among those students who truly aim to apply for this exam then don’t wait further and start your preparation as soon as possible.

Passing the SSC CHSL exam is not as hard as it might sound to you. Following the right path might work wonders for your case. Improve your score by doing in-depth introspection and subsequent correction. Mock exams on a variety of platforms will provide you with a wider range of practice questions. If you're a student who is asking, 'Is SSC CHSL easy to crack?' then we answer you that yes it can be easy for you if you are fully prepared.

For the SSC CHSL exam, here are some helpful preparatory advice:

Prepare for the SSC CHSL Exam by thoroughly familiarizing yourself with its course materials. Studying the SSC CHSL curriculum and following the SSC CHSL test pattern are critical if you want a high mark on the exam. Separating portions of the test based on the subject matter and degree of difficulty is strongly recommended.

Set up a custom timetable and study plan for yourself

SSC CHSL preparation calls for the creation of an individual study schedule. That may aid in the formulation of a comprehensive game plan. Furthermore, the establishment of clear objectives for one's academic development.

If at all feasible, take down notes

Take notes whenever you can while you're preparing for your exam. A fast check at these notes will make it simple to find what you need to know.

Get a firm grasp of the fundamentals

SSC CHSL applicants must be comprehensive with their fundamentals in order to have a solid understanding of what they are learning throughout their preparations.

Using last year's papers as a reference is critical to your success this time around. Additionally, you will be able to gauge the difficulty level of each part and the weight of each question. Prepare as many practice questions as you can so that you can quickly and accurately answer a question on the real test.

Taking SSC CHSL mock exams can give you a good idea of where you are in terms of your preparation. Moreover, help you identify your strengths and shortcomings, allowing you to focus on those areas that need development. By following a well-organized study plan and grasping fundamental ideas. It is feasible for anybody to successfully pass the SSC CHSL exam.

Don't only believe these stories and get help from a platform providing the best SSC CHSL Coaching in Chandigarh who can aid you and become your strength in passing the SSC CHSL test. To prepare for the tests, you need to distance yourself from distractions and concentrate yourself entirely. If you want to succeed, you'll need to put in the hours. True commitment is a certain way to reach your full potential. So, shift your perspective and begin to look at some positive elements that will inspire you to think beyond the box.

IBT Classes in Chandigarh have the best outcomes of coaching in SSC exams and Other Govt Exams for the last few years. IBT Chandigarh focuses on the skills needed to succeed in SSC exams.